NGO "Anti-Corruption Headquarters" has prepared the top 5 problems related to vaccination, as well as - specific solutions to solve them 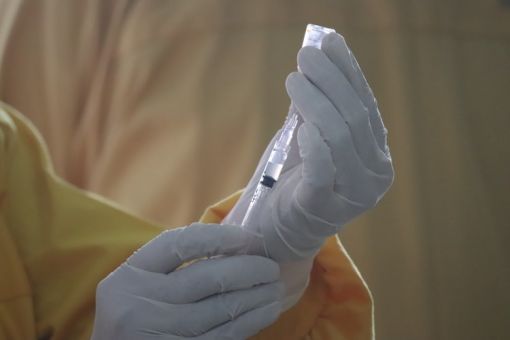 The COVID-19 vaccination campaign is underway in Ukraine. From the beginning, one of its systemic shortcomings was poor communication from the authorities. The lack of clear and up-to-date information on the procedure of vaccination on the background of the shortage of vaccine doses in the country puts Ukraine in the 121st place in the world ranking among the vaccinated population with the first dose.

The NGO Anti-Corruption Headquarters, together with partners, has prepared the top 5 problems related to vaccination and specific solutions to solve them. It will be about overpricing, non-transparency, and lack of proper accounting and control - so save our top 5 and join the monitoring.

1. Insufficient communication of the vaccination process

43% of Ukrainians do not intend to be vaccinated against COVID-19. This is evidenced by the results of a survey conducted by the sociological service of the Razumkov Center in the period from 21 to 26 May 2021. Despite the fact that the number of those who want to be vaccinated in the near future has increased from 12% to 19%, the overall figure remains extremely low. For example, in the United States, 53% of the population is already vaccinated with the first dose. Authorities have set a goal to vaccinate 70% of the population by July 4. Moreover, the Biden administration plans to allocate $ 130 million for an education campaign on vaccination. Thus, the administration plans to involve into vaccination people who doubt or have no motivation to be vaccinated against COVID-19.

Deputy Minister of Health Igor Kuzin during the event of the NGO "Anti-Corruption Headquarters" said that the quota, which was allocated for TV airtime to promote vaccination was used at 100%. Given that UNICEF in Ukraine is actively conducting an information campaign on the safety of continuous routine vaccination during the COVID-19 pandemic, mostly aimed at Internet users, the information campaign of the Ministry of Health, in our opinion, is not enough.

The results of a survey of 122 respondents conducted by the Anti-Corruption Headquarters at 15 vaccination points in three cities - Dnipro, Odesa and Kharkiv, also confirmed the lack of communication from the Ministry of Health about the need for vaccination against COVID-19.

Solution: The Ministry of Health needs to review its communication strategy, initiate an increase in funding for the vaccination process, and step up the fight against misinformation. If necessary, apply to the Verkhovna Rada and the Cabinet of Ministers in order to attract additional funding.

For a long time, the Anti-Corruption Headquarters noted discrepancies in the statistics on vaccination rates between the data of the National Health Service of Ukraine (which are formed on the basis of records in the electronic health care system - EHCS) and the data of the Ministry of Health, published on the official vaccination portal.

As of June 23, the Ministry of Health reports 1,793,999 people who received the first dose of the vaccine and 435,166 who received the second (a total of 2,229,165 vaccinations). However, according to the NHS analytical panel, only 1,955,487 vaccination records were made in the EHCS. Thus, there is a discrepancy of 273,678 people, which is a significant figure. According to the Ministry of Health, it is caused by delays in entering information into the EHCS. At the same time, the Ministry receives more up-to-date statistics directly from regional coordinators, who collect information from the heads of medical institutions on the basis of which vaccination points are deployed, and from mobile teams. It is worth noting that this method of accounting creates the preconditions for abuse, in particular the use of the vaccine to vaccinate people who are not at risk, by prior arrangement with the management of the medical institution. At the same time, records of EHCS vaccination are tied to a specific patient and make it possible to determine his age and belonging to the risk group.

Solution: In our opinion, the Ministry of Health and the National Health Service of Ukraine should insist on prompt entry of data into the EHCS in accordance with the Procedure for entering medical records. To do this, it is necessary to maintain communication with the management of institutions and to prosecute for delays. Also, it is advisable to communicate publicly only the data available in the EHCS.

3. Lack of use of "residual" doses

An urgent problem during the vaccination campaign is the use of so-called "residues" of vaccines. First of all, we are talking about the AstraZeneca vaccine, which is supplied in vials of 10 doses. According to the instructions for use, 6 hours after opening the vial, unused doses should be disposed of. Also, one vial of the Pfizer vaccine contains 6 doses.

Vaccination in Ukraine is based on the Roadmap, which identifies groups of the population that have priority access to vaccines (risk groups). In particular, as of June 23, people over the age of 60, as well as people aged 18-59 with concomitant diseases, prisoners and staff of prisons and remand prisons have the opportunity to be vaccinated in inpatient vaccination centers (according to stage 4 of the Roadmap).

However, the Roadmap does not specify the mechanism for using residues if the required number of at-risk patients do not wish to be vaccinated after opening the vial. As a result, the vaccination staff determines at their own discretion who can receive a dose of the vaccine. These can be people from different age groups, who are accepted in a live queue, or direct acquaintances of medical staff. Thus, the principle of fair access to vaccines is violated and the basis for corruption abuses arises - including access to the vaccine for “material reward”, as happened in a psychoneurological boarding school in the Kyiv region.

Solution: The Ministry of Health should make changes to the Roadmap, approving a clear algorithm, according to which in the absence of a sufficient number of people willing to be vaccinated, people from other risk groups are given priority. Such a mechanism must be flexible enough to change depending on the circumstances, but transparent enough to eliminate opportunities for abuse.

4. Opaque distribution of vaccines within the country

On May 29, mass vaccination points were opened in three cities of Ukraine - Kyiv, Lviv and Odesa, where people on the waiting list can be vaccinated through the Helsi website or the "Diya" application. In particular, such a center was opened in Kyiv on the basis of a private International Exhibition Center. During the two days of the center's operation, 3.4 thousand people were vaccinated. At the same time, this exceeds the number of vaccinations made in the previous week in such a large city as Kharkiv.

According to the monitoring conducted by the coordinators of the Anti-Corruption Headquarters in Dnipro, Odesa and Kharkiv, the main reason for the low rate of vaccination is the insufficient amount of vaccine at vaccination points. For example, as of June 23, only 17,064 doses of vaccines are available at all points in the Odesa oblast, some of which are reserved for the vaccination with the second dose.

The absence of vaccines in stationary points across the country, if they are available in temporary vaccination centers in specially designated cities, may indicate the opacity of the vaccine distribution mechanism. If this distribution is not tied to specific demographic and epidemiological indicators, it can become a hostage to political manipulation. In particular, the city authorities may enter into non-public arrangements with the coordinators of the vaccination campaign for the urgent opening of vaccination centers in their cities. In contrast, cities, where the government is in conflict with the country’s political leadership, may be left without the vaccine for a long time.

Solution: The mechanism for distributing vaccines between regions and local communities should be improved. It should be linked not only to the population (particularly at risk) but also to the level of morbidity and vaccination rates in the previous period. Vaccination centers should be opened on a clear basis, and the criteria to be met by local authorities to open such centers and obtain the appropriate number of vaccines should be communicated publicly.

5. Purchase of related goods at an inflated price

The need to comply with the conditions of the cold chain requires the medical institutions involved in the vaccination process to purchase additional refrigeration capacity. We analyzed more than 50 purchases of refrigerators for storage of vaccines made in the last 3 months and noted a number of cases of purchases at inflated prices. In particular, the City Hospital №5 of the Odessa City Council purchased GRW-143DD refrigerators at a price of UAH 7,200 apiece, while a similar model is sold for UAH 5,500 in open sale. Also, Communal Non-Profit Enterprise "Kherson City Clinical Hospital named after A. and O. Tropinykh ”of the Kherson City Council bought AKG 377 refrigerators at the price of UAH 60,000 apiece, while other medical institutions bought a similar model for UAH 43,000. At the same time, in the latter case, two cheaper offers were rejected. This may indicate inefficient use of budget funds in the interests of individual-related contractors.

Solution: Control over the medical procurement process should be strengthened. The State Audit Office should monitor the procedures in cases specified by the Law of Ukraine "On Public Procurement". NHSU should also conduct additional training for customers on the calculation of the expected value of the subject of the procurement, quality market consultations, etc.

The NGO "Anti-Corruption Headquarters" invites all stakeholders, namely - the Ministry of Health, the National Health Service of Ukraine, local governments, NGOs and patients to discuss these proposals. Only in the interaction between the public authorities and the civil environment can a consensus be reached on the principles of mass vaccination, which would reflect the interests of all groups of the population and prevent possible corruption violations.